Objective  To investigate the differential expression of miR-214-3p in plasma exosomes in different histological types of uveal melanomas (UMs) and evaluate miR-214-3p as a potential diagnostic and prognostic biomarker of UM.

Methods  The study cohort included 25 UM patients (10 with spindle-shaped melanomas, 10 with epithelioid cell melanomas, and five with metastatic UMs, including four with epithelioid cell melanoma and one with metastatic spindle-shaped melanoma) who underwent enucleation at Beijing Tongren Hospital (Capital Medical University, Beijing, China) between December 2015 and October 2019 and 10 healthy donors as normal controls. Blood samples were collected from all the subjects for isolation of plasma exosomes. The morphology of exosomes was examined under an electron microscope. Exsomal marker proteins were identified by western blot analysis. Expression levels of miR-214-3p in plasma exosomes were detected by real-time fluorescence quantitative polymerase chain reaction. Differential expression of miR-214-3p among patients with different histological types of UM and healthy controls was compared. The area under the receiver operating characteristic curve (AUC) was calculated to assess the diagnostic and classification performance of exosomal miR-214-3p.

Uveal melanoma (UM) is the most common intraocular malignancy in adults. Due to the lack of objective quantitative biomarkers, the clinical diagnosis of UM is generally based on indirect ophthalmoscopy combined with magnetic resonance imaging and B-scan ultrasonography 1, 2. Pathological examination after enucleation remains the gold standard for diagnosis of UM. Although highly accurate, the application of pathological examination is limited by enucleation, especially with the development of plaque brachytherapy. Hence, a noninvasive, convenient, and quantitative biomarker for the diagnosis of UM is urgently needed.

UM tends to metastasize even after treatment in more than 50% of patients. However, there are relatively few options for treatment of metastatic UM 3-5. Early treatment of high risk UM can reduce the risk of metastasis 6. MicroRNAs (miRNAs) are small, non-coding, single-stranded RNA molecules that post-transcriptionally regulate gene expression by inhibiting or inactivating target messenger RNAs. Expression patterns of miRNAs are frequently dysregulated in human tumors 7. The expression levels of various circulating miRNAs are measured as biomarkers in plasma, saliva, urine, and lacrimal fluid (tears) 8. Our group previously identified circulating miR-199a-3p as diagnostic and prognostic biomarker of both early and advanced UM 9. Previous studies have found that miR-21-5p acts as oncogene in cancers of the stomach, lung, and colon 10-12, and inhibits expression of P53 and promotes expression of LASP1, which stimulates the proliferation and metastasis of UM 13-14. In contrast to miR-21-5p, the role of miR-214-3p in the onset and progression of UM remains unclear.

Exosomes are extracellular vesicles with diameters of 40–100 nm present in almost body fluids, including plasma 16-18. In this study, expression levels of miR-214-3p were measured in plasma exosomes of UM as a potential diagnostic and prognostic biomarker of UM.

1.1.1 Study approval and patient consent  The protocol of this cross-sectional study was approved by the Ethics Committee of Capital Medical University (approval no. TRECKY2018-056). All patients and healthy donors were informed of the purpose of the study and submitted signed informed consent prior to inclusion in this study.

1.2.1 Plasma sample  Fasting venous blood samples were collected in vacuum tubes from all patients and healthy controls. After 30 min at room temperature, the blood samples were centrifuged at 1,200 r/min for 15 min at 4°C. Then, plasma samples were collected and stored at -80℃. All patients underwent enucleation after blood collection. Histopathological examinations of the enucleated eyes were performed by the Department of Pathology of Beijing Tongren Hospital to determine the histopathological type in addition to the tumor location, diameter, height, and malignancy status.

1.2.5 Identification of exosome biomarkers  Two plasma exosome samples from each group were used for identification of proteins as biomarkers of exosomes. In brief, the exosomes samples were rapidly thawed at 37°C and lysed in a six-fold volume of radioimmunoprecipitation assay buffer on ice for 30 min. The protein concentration was determined with the bicinchoninic acid assay. After denaturation, the proteins were separated by electrophoresis and then transferred to a polyvinylidene fluoride membrane, which was blocked with 5% skim milk/Tris-buffered saline with 0.1% Tween® 20 detergent for 1 h and then probed with primary antibodies against tumor susceptibility gene 101 (ab125011; dilution, 1:1,000) and calnexin (ab22595; dilution, 1:1,000; Aibo Trading Co., Ltd., Shanghai, China) overnight at 4°C, followed by secondary antibodies (dilution, 1:5,000) at room temperature for 1 h. The protein bands were visualized with enhanced chemiluminescence reagent and imaged with a chemiluminescence imaging system (ChemiScope 3000mini; Clinx Science Instruments Co., Ltd., Shanghai, China).

1.2.7 Quantification of miR-214-3p in plasma exosomes  For quantification of miR-214-3p, template RNA was reverse-transcribed into complementary DNA (cDNA) using a universal reverse transcription kit (11141es60; Shanghai Yisheng Biotechnology Co., Ltd., Shanghai, China). The cDNA was amplified using a real-time polymerase chain reaction (PCR) fluorescent quantification kit (11201es08; Shanghai Yisheng Biotechnology Co., Ltd.) and a real-time PCR instrument (Ma-6000; Suzhou Yarui Biotechnology Co., Ltd., Suzhou, China). Each 20-μL PCR reaction consisted of 10 μL of PCR master mix, 1 μL of the appropriate primers, 5 μL of cDNA as a template, and 4 μL of sterile ultrapure water. The primer sequences are shown in Table 2. U6 was used as an internal reference. The reaction conditions included an initial denaturation step at 95°C for 5 min, followed by 40 cycles at 95°C for 10 s, 60°C for 20 s, and 72°C for 20 s. All reactions were run in triplicate. Relative expression levels were calculated with the 2-ΔΔCt method. 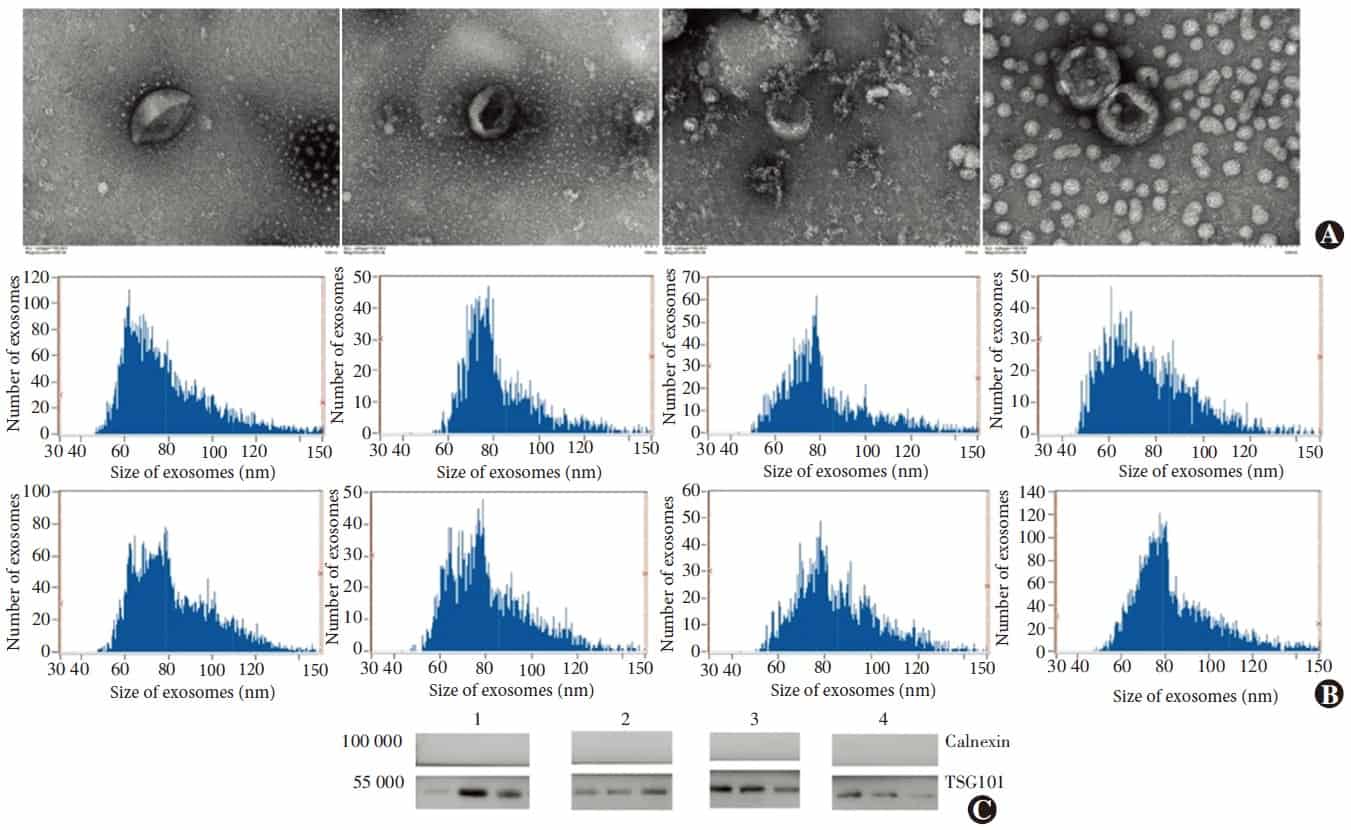 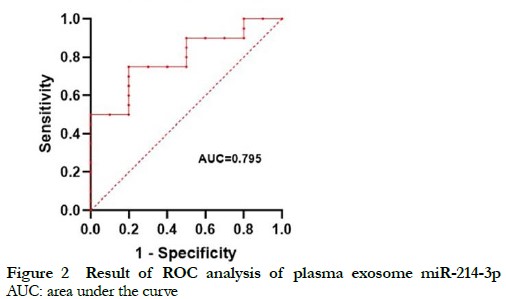 MiRNAs, as non-coding RNAs, participate in the regulation of various cell functions by negatively regulating specific mRNAs and are related to the onset and progression of numerous diseases, including various cancers 19. In addition to the cytoplasm, miRNAs also exist in all body fluids, including the plasma 20. Circulating miRNAs mainly exists in three forms: bound to proteins in nucleic acid-protein complexes, bound to lipoproteins in lipoprotein-nucleic acid complexes, and in exosomes 21-23. Notably, miRNAs in exosomes are encapsulated and, thus, can stably exist in the blood and avoid decomposition by nucleases. Hence, miRNAs have received wide attention as potential non-invasive and quantifiable tumor biomarkers. In addition, exosomes actively packaged and secreted by tumor cells participate in intercellular signaling for regulation of the growth of tumor cells 18. The differential expression of miRNAs in exosomes is particularly significant to elucidate the molecular mechanisms involved in oncogenesis.

The results of a previous study by our group showed that plasma miR-214-3p was significantly up-regulated in epithelioid cell melanoma as compared to spindle-shaped melanoma  9. Some miRNAs that function as tumor suppressors are selectively secreted by tumor cells, which promote the proliferation of tumor cells24. Previous studies have reported that miR-214-3p acts as a tumor suppressor in multiple cancers 25-26 and that epithelioid cell melanoma actively secretes greater amounts of miR-214-3p than spindle-shaped melanoma, thereby promoting proliferation of cancer cells. In this study, there was no statistically significant difference in normalized levels of miR-214-3p in plasma exosomes between spindle-shaped melanoma and epithelioid cell melanoma, which is consistent with the result of our previous study. Actually, blood cells are the main source of circulating miRNAs, although there are differences in levels of miRNAs in the blood versus tumor cells. However, it is more advantageous to monitor miRNAs in plasma exosomes, which are actively secreted by cells 24, 27. A particular miRNA can target hundreds of mRNAs, which explains why miR-214-3p is not only involved in tumor development, but other pathophysiological processes as well, including inflammation 28-29. Down-regulation of plasma miR-214-3p may be caused by other pathophysiological processes not necessarily associated with UM. In this study, normalized levels of miR-214-3p in plasma exosomes were significantly down-regulated in metastatic UM patients as compared to the normal controls, while there was no significant difference between metastatic UM and epithelioid cell melanoma, demonstrating that the circulating miR-214-3p may not be associated with UM. In addition, it should be emphasized that in addition to exosomes, circulating miRNAs also existed in the form of protein-nucleic acid complexes and lipoprotein-nucleic acid complexes, which are also actively secreted by cells 21-22. The results of this study did not completely negate the association between the circulating miR-214-3p and the prognosis of UM.

In this study, circulating miR-214-3p was identified as a potential biomarker for early diagnosis of UM. In addition, circulating miRNAs played important roles in intercellular communication and, thus, are useful to elucidate the mechanisms underlying tumor development.

Mir-214-3p can act as either a tumor suppressor gene or an oncogene 25-26, 30-32. The results of this study suggested that miR-214-3p acted as a suppressor gene in UM and reduced levels in blood and tumor tissue could be a mechanism related to the onset and progression of UM, suggesting that miR-214-3p is a potential target for treatment of UM.

As a potential limitation to this study, long-term follow-up of patients was not performed, thus survival analysis could not be conducted. In addition, circulating miR-214-3p in patients after treatment was not monitored and the patient cohort was relatively small. Therefore, future multicenter studies with larger cohorts across different races are warranted to further verify the association between circulating miR-214-3p and UM.

Conflict of interest  None declared.