Methods An ambispective cohort study was conducted. Seventy-four patients diagnosed with primary OAL by pathology at Tianjin Medical University Eye Hospital from November 2010 to December 2018 were enrolled. TNM staging of tumor was performed according to local tumor extent and lymph node or systemic involvement. Ann Arbor staging was carried out according to lymph node involvement and extranodal extension. The pathological type was classified according to the World Health Organization classification of lymphoma. The outcome of disease progression or death was analyzed. The Kaplan-Meier method was used for univariate survival analysis and the Cox proportional hazard model was employed for multivariate survival analysis to predict the risk factors affecting prognosis; hazard ratio (HR) and 95% confidence interval were estimated. This study adhered to the Declaration of Helsinki and the study protocol was approved by an Ethics Committee of Tianjin Medical University Eye Hospital (No. 2021KY[L]-32). Written informed consent was obtained from all patients before entering the cohort.

Ocular adnexal lymphoma (OAL) originates in the conjunctiva, eyelids, lacrimal gland, lacrimal drainage apparatus, and other orbital tissues[1]. The anatomic site and clinical manifestations in OAL are specific and different from systemic lymphomas, which originate in lymph nodes or extranodal organs. Most OALs invade eyelid swelling. Some cases are closely related to systemic lymphomas, with lymph nodes or distant metastasis. Therefore, clinical staging of OAL should be performed precisely according to the extent of tumor invasion, and the use of Ann Arbor and TNM staging systems has become widespread. The Ann Arbor system is mainly used for the clinical staging and treatment of Hodgkin lymphoma, but its prognostic value for OAL remains controversial 2 because OALs are primarily extranodal non-Hodgkin lymphoma. The TNM staging system was initiated by the American Joint Committee on Cancer (AJCC) in the 7th edition of the Cancer Staging Manual and was revised in the 8th edition to assess the prognostic value 3-4. At present, there is no relevant report regarding the effect of TNM staging on the survival and prognosis of OAL in China. In addition, the various pathological types of lymphoma are complex and diverse. The pathological classification of OAL according to the World Health Organization (WHO) classification criteria is helpful for diagnosis and treatment, and is closely related to prognosis 5. Therefore, this retrospective study aimed to evaluate clinical stage and other risk factors in the prognosis of OAL.

An ambispective cohort study was conducted. The study was approved by Tianjin Medical University Eye Hospital Foundation Institutional Review Board and adhered to the principles of the Declaration of Helsinki. Informed consent was obtained from all included subjects. A retrospective analysis was performed on the clinical data of patients diagnosed with primary OAL by pathological examination in Tianjin Medical University Eye Hospital (Tianjin, China) from November 2010 to December 2018. Inclusion criteria were as follows: 1) primary OAL; 2) confirmed pathological diagnosis; and 3) follow-up time ≥3 months. Exclusion criteria were as follows: 1) secondary to systemic lymphoma; 2) unclear pathological diagnosis; or 3) incomplete follow-up data or follow-up time < 3 months. A total of 74 cases were ultimately included in the analysis; this included 50 males and 24 females, with a mean age of 64 ± 14 years, and a median medical history of 6 (4, 18) months. A total of 65 cases occurred unilaterally whereas nine occurred bilaterally.

All patients underwent a computed tomography/magnetic resonance imaging (CT/MRI) examination of the orbit, head and neck, chest, and abdomen. TNM staging was performed according to AJCC eighth edition criteria (Table 1), and Ann Arbor staging was performed according to the Lugano revision (Table 2). For bilateral tumors with different T staging, staging for the more severe side was recorded. Pathological diagnosis and classification were made by pathologists from Tianjin Medical University Eye Hospital according to WHO classification criteria 6. The positive rate of Ki-67 was recorded as the percentage of positive immunohistochemical nuclear staining in all tumor cells. 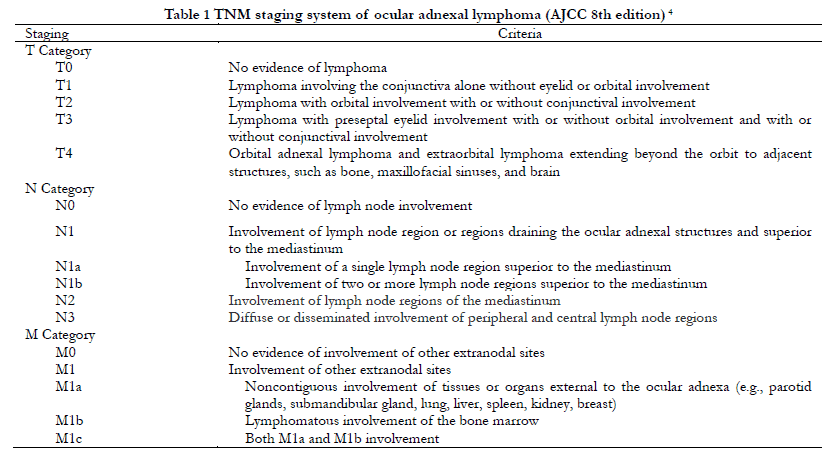 The follow-up ended on November 1, 2021. The outcome events included: 1) death from the disease; and (2) progressive disease (PD): any new lesion or increase by ≥50% of previously involved lesions from nadir, respectively 7. Overall survival (OS) and progression-free survival (PFS) were calculated from the date of diagnosis. OS was defined as the period until the date of death or last follow-up, and PFS was defined as the period after the initial treatment until disease progression or until the last follow-up date.

The prognostic factors for OAL were analyzed using SPSS Statistics 25 (NY, USA). Continuous variables were expressed as ±s or median (interquartile range) ([M(Q1, Q3)), according to the normality tests. Categorical variables were expressed as number (percentage). Categorical variables were compared using the χ2 test or Fisher exact test. The one-way ANOVA or Kruskal-Wallis H test, where appropriate, was used to compare continuous variables between two groups. The Kaplan-Meier test was used for univariate survival analysis. The Log-rank test was used to compare survival results of each subgroup. The variables in univariate analysis at a significant level of P<0.1 were then analyzed in a Cox proportional risk model for multivariate survival analysis. Finally, variables were defined as significant at P<0.05. 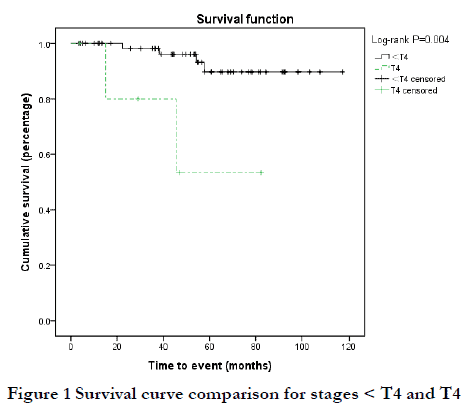 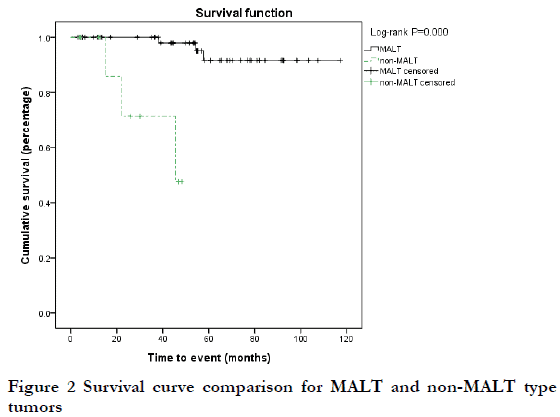 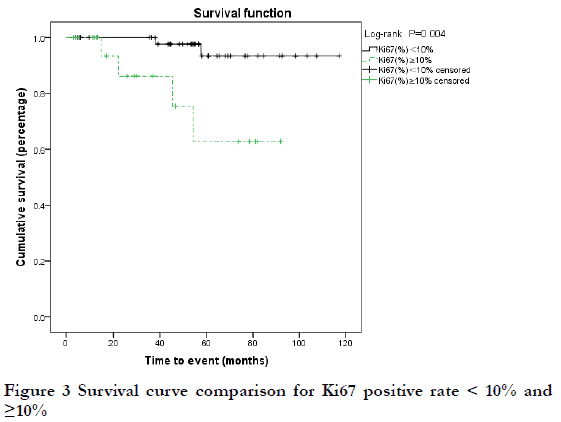 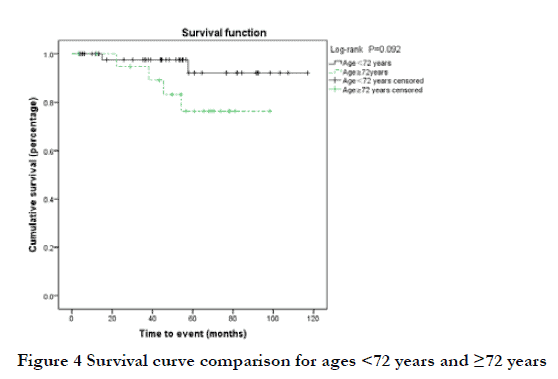 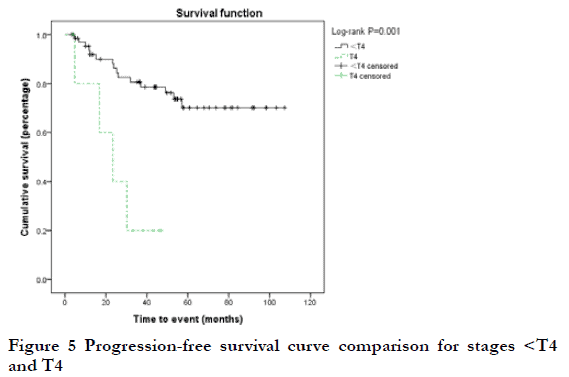 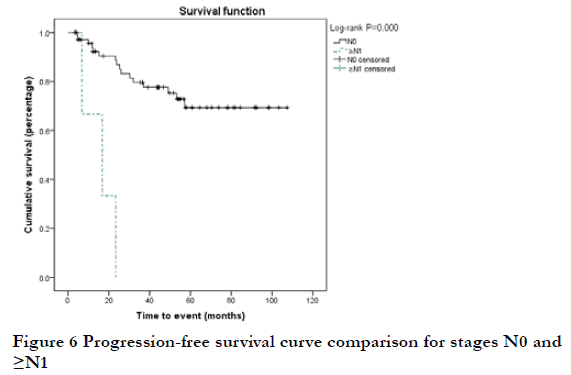 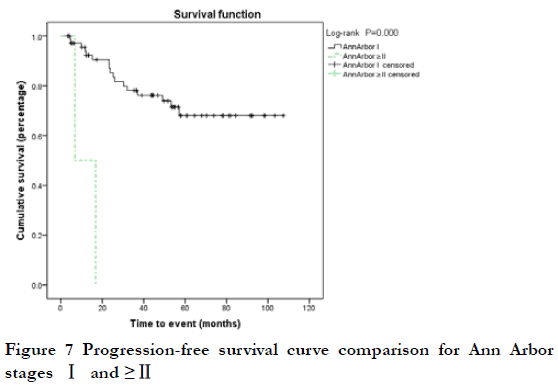 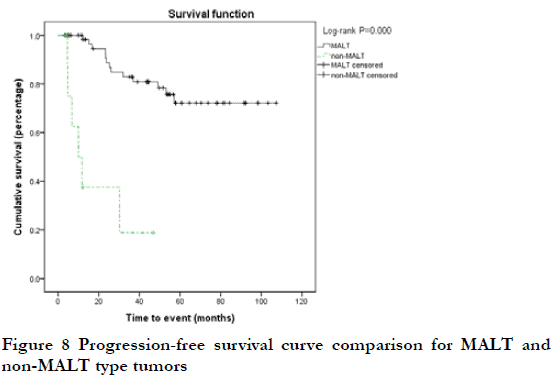 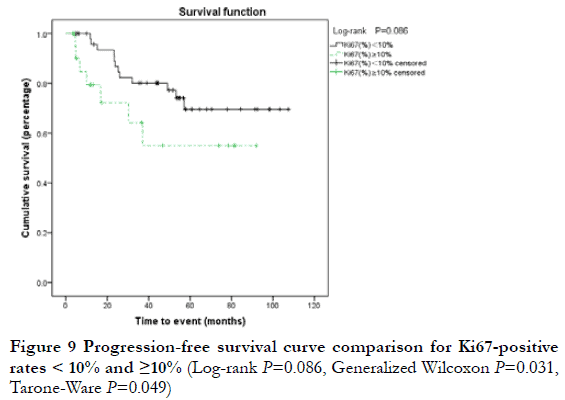 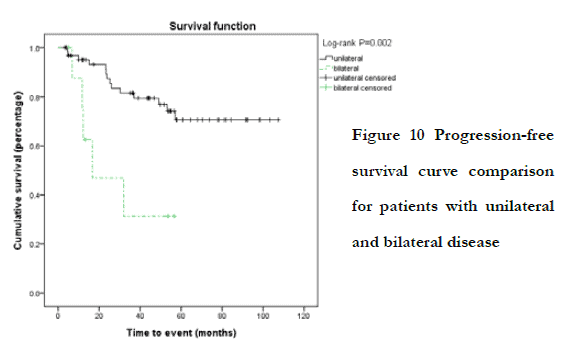 The TNM staging system was revised in the AJCC 8th edition by deleting the substages of T1, T2, and T4 from T stage, as well as redefining N stage by the number of lymph nodes involved in the ocular adnexal drainage area and the position of mediastinum. Multiple studies suggest that the TNM system is useful for disease prognosis, but the conclusions of prognostic values show some differences. Sniegowski et al. 9 reported that increased T stage was related to decreased disease-free survival, and the OS rate of T4 stage tumors was significantly reduced. Nam et al. 10 proposed that the complete response rate of lymphoma located in the conjunctiva was higher after initial treatment, but there was no difference in recurrence and mortality between conjunctiva and non-conjunctiva groups. Kwon 11 used the AJCC 8th edition stage system for OAL to perform univariable analyses, and found that patients in ≥T2 and ≥N1 stages had increased risk of recurrence and decreased PFS, among which T4 stage was closely related to distant relapse (HR=11.08). Our study aimed to validate the new AJCC staging system to determine the prognosis of patients with OAL at univariate and multifactorial levels, and found that the risk of death in T4 stage patients was eight times higher than that in < T4 stage patients. Furthermore, we found that the risk of progressive disease in T4 and ≥N1 cases was six and twelve times higher, respectively, than that in < T4 and N0 cases. By multiple factors, T stage was not an independent risk factor for reducing OS or PFS, but ≥N1 stage and non-MALT pathological type did show significant regulatory effects on disease progression. These results suggest that high T category is predictive of decreased OS or DFS, which may be affected by the synergistic effect of N stage and pathological type. If a T4 tumor spreads out of the orbit, it will invade the paranasal sinus, temporal fossa, skull base, and other sites, and can spread more easily through the lymphatic pathway to result in metastasis or death. While low T category may not be significantly associated with recurrence or survival, it is more meaningful for accurately documenting lesions during follow up.

Pathological type is an important factor affecting the prognosis of disease. The most common pathological type is MALT lymphoma, followed by follicular lymphoma (FL), diffuse large B-cell lymphoma (DLBCL), mantle cell lymphoma (MCL), as well as others 12. MALT and FL tumors usually present with local indolent growth. Their prognoses (10-year OS rate 92% and 71%, respectively) are significantly better than DLBCL and MCL (10-year OS rate 41% and 32%, respectively), and the risk of reduced OS and PFS about 25 times and six times that of DLBCL and MCL, respectively 11,13. Some studies have pointed out that DLBCL is an independent risk factor for disease recurrence in common pathological types 14. However, due to the limitation of samples, the proportion of some pathological types in this study was small or missing. We divided the patients into two groups, and found that the risk of death and disease progression in non-MALT lymphoma was about 33 and 11 times greater, respectively, than with MALT lymphoma. High-grade lymphomas such as DLBCL, MCL, and nature killer (NK)/T are characterized by aggressiveness, accompanied by a large number of mitotic figures and a high proliferation index, which are of significant prognostic value 15. Ki67 is a monoclonal antibody combined with proliferating cell nuclear antigen. The Ki67 proliferation index can be used to reflect the characteristics of tumor cell proliferation and to predict clinical outcomes. This should be assessed by counting the percentage of cells with positive nuclear expression of Ki67, with a Ki67 (%) > 30% usually indicating a poor clinical prognosis 16. In this study, the risk of death in the Ki67 (%) ≥10% group was approximately eight times higher than that in the Ki67 (%) < 10% group. Considering the median Ki67 (%) of non-MALT tumors was 55%, which was significantly higher than that of MALT type tumors, it was speculated that high Ki67 index and high-grade pathological type might have a synergistic effect. However, at the multifactorial level, pathology was the only risk factor affecting OS and PFS. Therefore, Ki67 (%) indicated tumor proliferation activity and risk of early recurrence, but did not independently regulate OS or PFS under the influence of pathological types and other factors.

MALT lymphoma is sensitive to radiotherapy, with the 5-year local control rate reaching 100% at an average dose of 30 Gy, the 5-year OS ranging from 89% to 100%, and the 5-year PFS ranging from 75% to 92% 17-22. Oh et al. 23 reported that radiotherapy also had a good effect on bilateral disease, and bilateral low-dose radiotherapy (< 30 Gy) had a tendency to prolong PFS more than chemotherapy. Treatment of DLBCL has not yet formed into a unified plan, and a combination treatment of surgery, chemotherapy, and radiotherapy is mostly used with a 5-year OS of 20% to 36% 24-25. At present, immunochemotherapy using a B cell monoclonal antibody (Rituximab) is the standard treatment for B-cell derived lymphoma, and more rigorous controlled clinical studies are needed 26. Nowakowski et al. 27 applied R‑CHOP in combination with Lenalidomide in the treatment of Ann Arbor II-IV stage DLBCL with an overall response rate of 98%, a complete response rate of 80%, and 2-year PFS and OS of 59% and 78%, respectively. Kim et al. 28 applied an R-CVP (rituximab, cyclophosphamide, vincristine, and prednisolone) regimen for bilateral or extra-conjunctival involved ocular MALT lymphoma, and reported a 4-year PFS and OS of 90.3% and 100%, respectively. The results of this analysis showed that there was no statistical difference in PFS or OS among all treatment regimens. In consideration of age, pathological type, chemotherapy side effects, and other factors, postoperative radiotherapy should be the first choice and follow-up protocols for high-risk patients should be strengthened. Due to the limited sample size of this study, further large-sample, multi-center clinical studies are needed to evaluate the synergistic and overall effects of related factors on OAL disease prognosis.

In conclusion, TNM stage and pathological type are important clinical prognostic indicators of ocular adnexal lymphoma. Under the effect of a single factor, the risk of death and disease progression was higher in patients with T4 stage, ≥N1 stage, and non-MALT tumors. Under the effect of multiple factors, pathological type was an independent risk factor of OS and PFS, and N stage was an independent risk factor of PFS. Patients with high TNM stage or non-MALT type tumors should be monitored closely.

Conflict of interest  None declared.