Objective  To observe the characteristics of macular telangiectasia (MacTel) in multi-color and multi-mode fundus images.

Methods  A retrospective case series study was conducted. Sixteen eyes of 12 patients diagnosed with MacTel by fluorescein fundus angiography from January to November 2019 in Shandong Eye Hospital were analyzed. There were eight cases (eight eyes) with MacTel type Ⅰ, among which four cases were male and four cases were female, with an average age of 62.3 ± 12.5 years. The other four cases (eight eyes) were MacTel type Ⅱ, all of which were female, with an average age of 58.7 ± 10.5 years. Best-corrected visual acuity, slit lamp microscopy, color fundus photography, colorful fundus laser scanning imaging, fluorescein fundus angiography (FFA), optical coherence tomography (OCT), and optical coherence tomography angiography (OCTA) were conducted for all patients. This study adhered to the Declaration of Helsinki. The study protocol was approved by the Ethics Committee of Shandong Eye Institute (No. 2019S003).

increased foveal avascular zones were found in MacTel type II eyes. In FFA of the early stages, delayed capillary filling near the fovea was seen in MacTel type Ⅰ eyes, and dilated temporal vessels in the fovea, some of which showed tumor-like dilation, and limited tumor-like dilation was enhanced in the later stage. Different degrees of dilated parafoveal blood vessels were seen in the early stage, and the capillary in the temporal side of the macula showed diffuse strong fluorescence in the late stage by FFA in MacTel type Ⅱ eyes.

Conclusions  Multi-color fundus laser scanning imaging could be used to show the morphological characteristics of MacTel, indicating that the imaging features of different types of MacTel eyes were significantly different.

Macular telangiectasia (MacTel) is a disease involving dilation of the parafoveal capillary network in the macula, and neurosensory retinal atrophy, manifesting as visual distortion and progressive visual loss. In earlier studies, the idiopathic parafoveal retinal telangiectasia was defined, which was differentiated from Coat’s disease 1. With ongoing in-depth research, MacTel is divided into three groups, including six subtypes 2. A simplified classification method of idiopathic MacTel was proposed, based on whether MacTel was one of two types, namely, aneurysmal telangiectasia (type I) or parafoveal telangiectasia (type 2) 3. As multiple fundus imaging techniques have been developed in recent years, optical coherence tomography (OCT) and OCT angiography (OCTA) have been widely used in the diagnosis of MacTel 4. Multi-wavelength and multi-color scanning laser fundus imaging can simultaneously scan the superficial, intermediate, and deep retinal structures using three laser beams, and then can acquire the reflection images in different depths and at different layers of tissue structures through superposition and pseudo-color technology 4-6, through which MacTel images can be more intuitively observed. Currently, the analysis of clinical characteristics of multi-wavelength multi-color scanning laser fundus imaging in MacTel has rarely been reported, and the analysis results could provide a basis for the diagnosis and classification of MacTel. Therefore, this study was designed to investigate the characteristics of multi-color scanning laser fundus imaging in different types of MacTel patients.

A total of 12 patients (16 eyes) diagnosed with MacTel at Shandong Eye Hospital from January to November, 2019 were enrolled and analyzed using case series observations and research methods. The patients enrolled included eight cases (eight eyes) of type I MacTel [four cases (four eyes) of males and four cases (four eyes) of females], with an average age of 62.3 ± 12.5 years, and four cases (eight eyes) of type II MacTel, all of which were females, with an average age of 58.7±10.5 years. All patients complained of reduced vision with or without visual distortions. Intraocular pressure and anterior segment examinations of all eyes revealed no abnormalities. The best-corrected visual acuity (BCVA) of eyes with type I and type II MacTel were 0.05−0.7 and 0.2−0.8, respectively. According to previous studies 3, 7, the inclusion and exclusion criteria were formulated. The inclusion criteria were as follows: 1) patients who were diagnosed as MacTel using fundus fluorescein angiography (FFA) and OCTA, and 2) those with a transparent refractive medium that could ensure a sufficiently clear image. The exclusion criteria involved patients with retinal vascular diseases or other fundus diseases such as inflammation. This study conformed to the Declaration of Helsinki, and the research regimen was approved by the Ethics Committee of Shandong Eye Institute (Approval No.: 2019S003).

The BCVA of all patients was examined, and then converted into logarithm of the minimum angle of resolution visual acuity, followed by anterior segment examination using a slit lamp microscope. Subsequently, tropicamide phenylephrine eye drops were used for mydriasis, and then a traditional retinal camera (TRC-50DX; Topcon, Tokyo, Japan) was used for color fundus photography. A Spectralis HRA+OCT (Heidelberg, Germany) was used for FFA, spectral-domain OCT (SD-OCT), OCTA, and multi-color scanning laser fundus imaging.

The patients were instructed to sit in front of the retinal camera after full dilation of the pupil. After they looked straight ahead with the head adjusted, color fundus photography was performed, and the obtained photographs were saved.

After mydriasis, in a sitting position, the patients were instructed to place their chin in the chin rest, with the forehead clinging to the rung, and to look at the blue cross cursor in the eyepiece. With the device aiming at the pupil of the patients, the focal length was adjusted until a clear image appeared on the screen. To reduce the strong light exposure time of the patients during the examination, the macular area was initially traced in the infrared (IR) mode, then in the multi-color mode. The examination order was the healthy eye first and then the affected eye.

The macular area of the patients was traced in the IR mode, and then the structural image of the macular area was obtained in the OCT mode. The image acquisition was performed in a 15°×15° paramacular area using multi-beam (a total of 99 beams with an interval of 120 μm) scanning at a speed of 88,000 times/s.

The macular area of the patients was traced in the IR mode, and then subjected to multi-beam (a total of 384 beams with an interval of 11 μm) scanning in the OCTA mode. The images were acquired in a 15°×15° paramacular area at a speed of 68,000 times/s. Later, the blood flow in the macular area was observed.

The patients initially underwent an allergy test to sodium fluorescein, and those with a negative skin test quickly received an injection of 3 mL of 20% sodium fluorescein in the median elbow vein of the forearm within 5 s. At the beginning of the injection, the angiography time was recorded. The whole FFA procedure required 15 min.

Imaging of the same patient was completed by the same physician on the same day. If the scanning position and image quality did not meet the requirements, or there were excessive pseudo-motions, the imaging was repeated, and the retinal structure was manually segmented, if necessary. Two professionally trained ophthalmologists were responsible for the diagnosis, image reading, and quality review of images. If the imaging reading results obtained by the two ophthalmologists were not the same, a consensus was reached by participation of a third ophthalmologist based on his/her review of imaging reading results.

As shown in the color fundus images of type I MacTel eyes, lipid exudation with yellow pigment showing an unclear margin and the macular edema with an obscure boundary occurred in six eyes, macular edema without hard macular exudation occurred in one eye, and hard macular exudation without edema occurred in one eye. In addition, the color fundus images of type II MacTel eyes showed that the macula, especially the temporal side of the macula, was grey because its transparency was decreased in eight eyes, and tiny crystalline deposits were found in some areas (Figure 1). 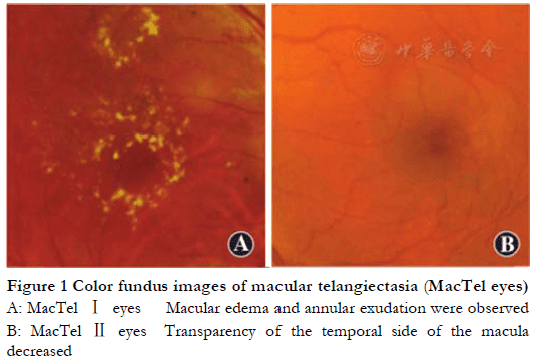 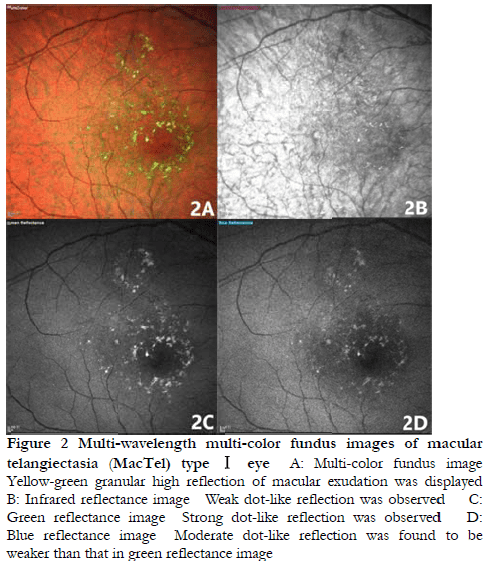 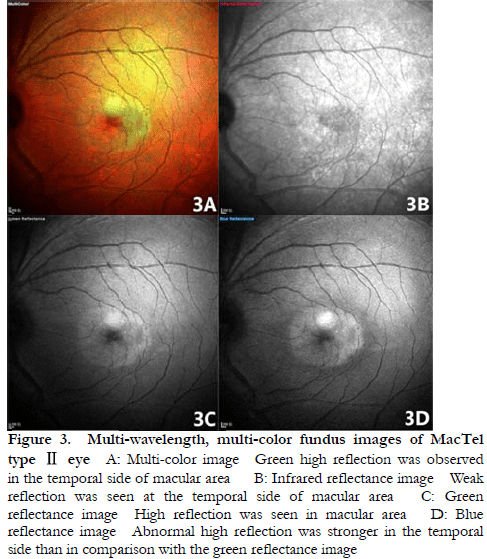 In SD-OCT images of type I MacTel eyes, cystoid edema of the inner retina, and uneven high reflection signals of the outer plexiform layer of retina were observed in six eyes, punctate high reflection in the outer plexiform layer of the macular region in one eye, and only macular edema in one eye. Moreover, in SD-OCT images of type II MacTel eyes, partial defects in the inner and outer structures of the retina and formation of retinal cavities were seen in three eyes, and losses of the outer structure of the retina and macular atrophy were seen in five eyes (Figure 4). 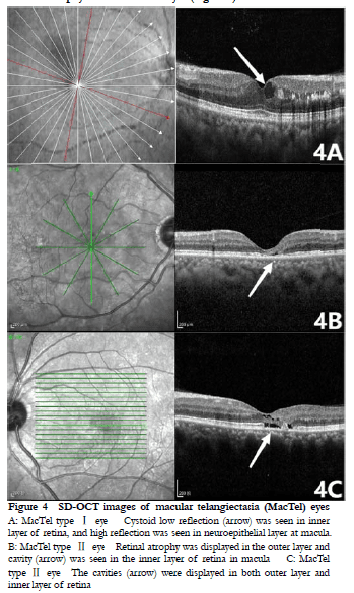 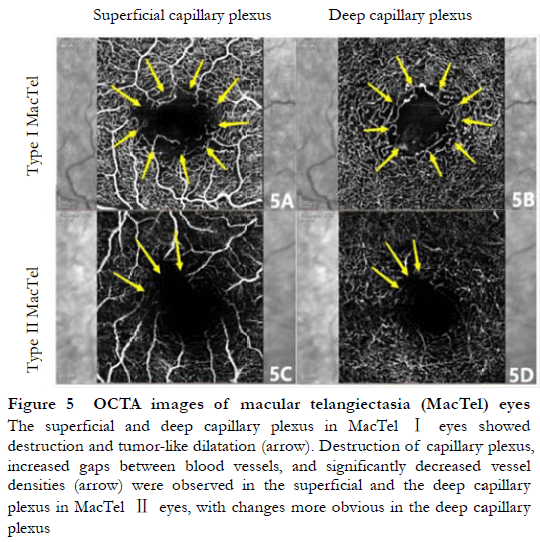 In the early stage, type I MacTel eyes had delayed filling of the parafoveal capillaries and dilated temporal vessels, some of which showed tumor-like dilation, and the limited tumor-like dilation was enhanced in the late stage (Figure 6). However, type II MacTel eyes showed different degrees of parafoveal small blood vessel dilation of the macula in the early stage, and diffuse strong fluorescence in the temporal capillaries of the macula in the late stage (Figure 6).
2.5 Characteristics of MacTel FFAFigure 5  OCTA images of macular telangiectasia (MacTel) eyes   The superficial and deep capillary plexus in MacTel Ⅰ eyes showed destruction and tumor-like dilatation (arrow). Destruction of capillary plexus, increased gaps between blood vessels, and significantly decreased vessel densities (arrow) were observed in the superficial and the deep capillary plexus in MacTel Ⅱ eyes, with changes more obvious in the deep capillary plexus 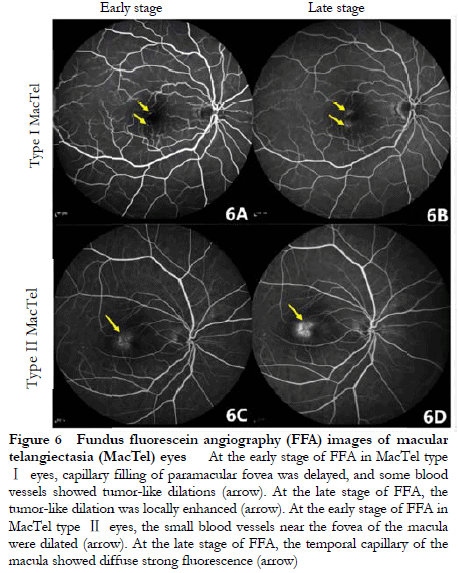 Furthermore, green reflection in multi-wavelength, multi-color scanning laser fundus images mainly reflected the inner layer of the retina, including the inner and outer plexiform layers and inner nuclear layer. Blue reflection mainly represented the surface of the retina and the contact tissue between the vitreous and the retina 6. In this study, the green and blue reflection images of MacTel eyes displayed positive manifestations, showing characteristic high reflection of the parafovea. In comparison with common color fundus photography, multi-color scanning laser fundus imaging can show the morphological changes of the macular surface more intuitively and clearly, thus greatly reducing the possibility of misdiagnosis and missed diagnosis.

The exact pathological mechanism of MacTel remains elusive. Some studies have shown that type I telangiectasia is a result of the functional or structural destruction of the blood-retinal barrier, which leads to damage of the blood vessel wall, aneurysm formation, or telangiectasia 8. There are slight, patchy non-perfusion areas or capillary ischemia and lipid deposition in the fundus of the affected eye. Lipids are mostly associated with abnormal capillaries, or persistent, focal, and larger aneurysms 3. In this study, the multi-color scanning laser fundus images showed that the retinal surface showed granular yellow-green reflections, and stronger granular reflections were observed in green reflectance images than in the blue reflectance images and IR reflectance images, which was consistent with the pathological characteristics of lipid exudation in the outer plexiform layer.

In summary, studies of multi-mode fundus images were helpful in understanding MacTel at a deeper level and from multiple aspects, and provided more options for its early diagnosis and differential diagnosis. Multi-wavelength, multi-color scanning laser fundus imaging was an effective tool for MacTel examination. In contrast to traditional color fundus photography, it could display the lesions in more depth and more effectively, facilitating early screening and observation of changes in paramacular telangiectasia. There were still some limitations in this study, such as the small sample size, which needs to be further expanded for verification in the future. The clinical features of MacTel largely differed in different types, which suggested that the vitreoretinal interface and retinal blood vessels may have exerted different effects in the pathogenesis of different MacTel types, which should be further validated in the future.

Conflict of Interest   All authors declare that there is no conflict of interest.