Diabetic retinopathy (DR) is a major sight-threatening microvascular complication of diabetes. The overall prevalence of DR among diabetic patients is about 23% in China. Studies show that the prevalence of DR in patients who have been diagnosed with type 1 and type 2 diabetes for at least 15 years is 98% and 78%, respectively. Given a lack of effective means to prevent and treat DR, it is important to investigate the pathogenesis of DR to enable the development of novel therapeutic interventions. Vascular endothelial cell dysfunction and metabolic changes in the retinal microenvironment have been implicated in DR pathogenesis. Therefore, prevention of these changes can potentially reduce the risk of diabetic vascular complications. Circulac RNA (circRNA) represents a class of non-coding RNA that is widely found in eukaryotic organisms, which is characterized by high stability, conservativeness, certain time sequence and tissue specificity. The major functions of circRNAs include (1) competing with microRNAs (miRNAs) for binding; (2) interacting with proteins through RNA-binding proteins; (3) regulating the expression of parental genes by modulating the transcription of RNA polymerase; (4) mediating the formation of pseudogenes through selective splicing or base complementary pairing; (5) and acting as mRNA-encoded proteins. Growing evidence increasingly implicates circRNAs in the pathology of lung, esophageal, gastric, colorectal, pancreatic and hepatocellular carcinomas. As such, circRNAs is a potential target for the early diagnosis and treatment of these cancers. Moreover, it has also been suggested that circRNA influences the secretory function of pancreatic islet cells by regulating the expression of downstream target genes, and thus playing a role in the development of diabetes and its complications. A comparative study conducted by our group using circRNA microarrays of plasma from five patients with proliferative DR, five patients with type 2 diabetes mellitus without significant fundus lesions, and five age-matched normal subjects revealed significant changes in plasma circRNAs profile in patients with proliferative DR — confirming the potential role of circRNAs in the pathogenesis of DR. Analysis of plasma samples is known to be inaccurate owing to the vulnerability of its components to the overall body conditions. In contrast, direct cellular assays are more reliable in detecting the effect of high glucose stimulation on circRNA expression in retinal vascular endothelial cells. In this study, we aim to identify the differentially expressed circRNAs using circRNA microarray between normal and high glucose cultured human retinal vascular endothelial cells (HRVECs) before validating them by real-time fluorescence quantitative PCR. We also aim to investigate their possible target miRNA, with a view to ultimately enabling more effective diagnosis and treatment of DR.

1.2.1 Culture and Grouping of HRVECs  HRVECs were cultured and passaged in DMEM low sugar medium containing 10% FBS by volume and 100 U/ml of penicillin/streptomycin mixture at 37℃and 5% CO2 by volume in a constant temperature CO2 incubator, with fluid changes every 2~3 days. After growing to 80% confluence, the cells were passaged and cultured in groups, namely (1) normal control cells in 5.5 mmol/L glucose medium; (2) hypertonic control cells in 19.5 mmol/L mannitol and 5.5 mmol/L glucose medium; (3) and high glucose cells in 25 mmo/L glucose medium. Each group of cells was incubated in a cell thermostat at 37℃ for 24 hours. The experiments were repeated three times independently.

1.2.2 Detection of circRNA expression in cells by circRNA microarray and screening of differential genes  The cells of normal control and high glucose groups were washed three times with pre-cooled phosphate buffer, before being lysed by adding Tczol to extract the total RNA from the samples. The purity and concentration of nucleic acids were determined by UV spectrophotometer, i.e. the value of A260/A280 should be 1-8 – 2.0, and the total amount of RNA should reach 500 ug. The purity and integrity of RNA were determined by denaturing agarose gel electrophoresis with formaldehyde electrophoresis reagent. The assays were performed by Shanghai Kangcheng Bioengineering Co., Ltd. using circRNA microarray V2.0. The total RNA extracted from the normal control and high glucose groups was treated with RNase R. The cDNA was synthesized by reverse transcription and labelled with fluorescence using the Array star Supec RNA Labeling kit. The fluorescent labeling efficiency was determined by Nanodrop, and the labeled probes were hybridized with the high-density genomic microarray under standard conditions. The GenePia 4000B microarray scanner was used to detect the fluorescence intensity of the microarrays. GenePix Pro6 software was used to convert the results into digital data for storage purposes. The raw data were normalized using the R limma package, and the differentially expressed circRNAs in the two groups of samples were identified according to the fold change (FC)≥1.5 or FC≤0.67 and P<0.05.

1.2.3 Validation of differentially expressed circRNA using real-time fluorescent quantitative PCR  The top 3 circRNAs ranked for FC were selected from the up- and down-regulated differentially expressed cicRNAs, respectively. Firstly, the full-length sequences of circRNAs were obtained from the circRNA database (http://www.circbase.org/). The primers were designed upstream and downstream across the junction site of circRNA according to the divergent primer design principle to ensure that the amplified products contained the junction site. The specific primer sequences of each target circRNA are shown in Table 1. The primers were synthesized by Hefei General Biosystems with GAPDH as the internal reference. Cells from normal control, hyperosmotic control and high glucose groups were collected and treated with Trizol to extract total RNA. cDNA was obtained by quantitative reverse transcription, and primers were amplified by real-time fluorescence quantitative PCR. A total of 50 μl of reaction system was used, including 1 μl of forward reverse primer alongside 1 μl of reverse primer, 2 μl of cDNA, 21 μl of RNase-free water, and 25 μl of qRT-PCR enzyme. 15 μl of the mixture was added to three wells of a 96-well plate — centrifuged — before running the program in a qPCR instrument. The reaction conditions for real-time fluorescence PCR were as follows: (1) pre-denaturation at 95 ℃ for 3 min; (2) denaturation at 95 ℃ for 5 s; (3) annealing at 60 ℃; (4) and extension for 34 s. A total of 40 cycles were performed. The melting curves (95 ℃ 1 s, 60 ℃ 20 s, 95 ℃ 1 s) were used to analyze the amplified product. The relative expression of each target gene was calculated using the 2-∆∆Ct method. 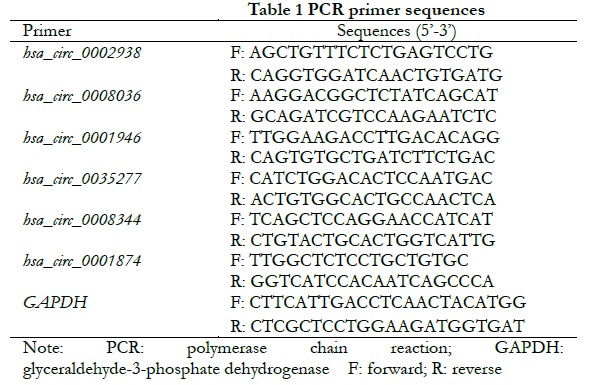 1.2.4 Prediction of miRNA binding sites  The Circinteractome database (https://circinteractome.nR.nih.gov/index.html) was used to predict the potential downstream miRNA targets of the six most significantly differentially expressed circRNA molecules based on their tightness of binding.

SPSS 19.0 software was used for statistical analysis. The data of measurement data were confirmed to be normally distributed using Shapiro-Wilk test and expressed as `x±s. The overall difference of circRNA relative expression among the three groups was compared with one-way ANOVA, while the LSD-t test was used in a two-way comparison between groups. P<0.05 was considered to be statistically significance. 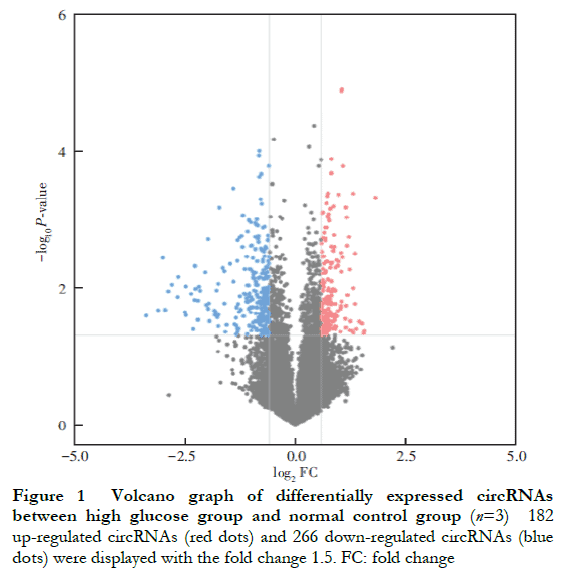 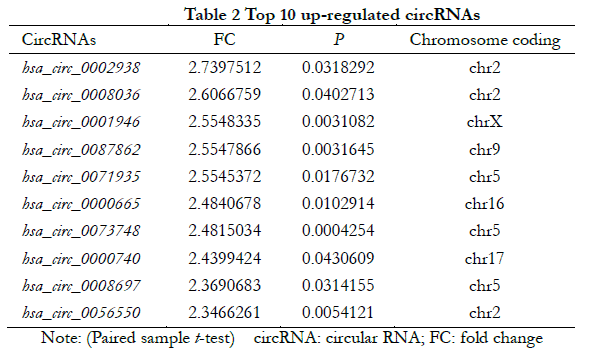 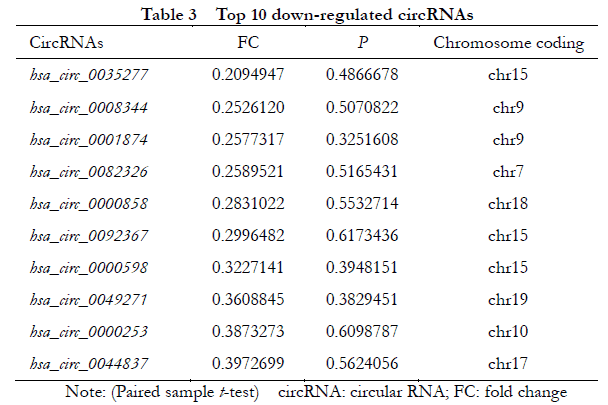 The five most likely target miRNAs for each differentially expressed circRNA are listed in Table 5 according to the number of binding sites and the degree of tightness.

Zhang et al. identified 529 differentially expressed circRNAs in the retinal tissues of three normal subjects and two diabetic patients. They suggested that has_circRNA_0005015 might bind to miR-519d-3p and regulate vascular endothelial cell function. CircRNA crcHIPK3 inhibited miRNA-30a-3p expression, resulting in increased expressions of vascular endothelial growth factor C, Wnt2 and frizzled class receptor 4 (FZD4). This in turn caused endothelial cell proliferation and vascular dysfunction. Under hypoxic and high-glucose conditions, the expression of circRNA-ZNF609 was significantly upregulated. It binds to the endogenous miR-615-5p, thereby inhibiting miR-615-5p activity and enhancing HRVECs viability, mobility and lumen formation. Furthermore, high-throughput sequencing of differentially expressed circRNAs in the vitreous specimens from DR patients and non-diabetic patients in addition to high-glucose cultured human umbilical vein vascular endothelial cells confirmed that circRNAs regulate the gene expression associated with vascular endothelial function and angiogenesis by targeting miRNAs. Liu et al. studied circRNA-cPWWP2A in pericytes and found that it bound to miR579 and improved retinal leakage in an animal model of diabetes. In contrast, we did not find any of the same differentially expressed circRNA molecules as in these studies. This may be attributable to the difference in specimens used.

MiR-486-3p is one of the predicted target miRNAs of hsa_circ_0002938. Its upregulation has been reported to suppress oxidative stress, inflammation and apoptosis in DR mice and promote muller cell proliferation under high glucose status. MiR-224-5p is one of the predicted target miRNAs of hsa_circ_ 0035277, and it has been implicated in the inflammatory response in the hippocampus of type 2 diabetic patients through the NLRP3 pathway. These downstream miRNAs are involved in oxidative stress, inflammation and other processes in the pathogenesis of DR, which affect endothelial cell proliferation, migration and lumen formation capacity as well as the expression of vascular endothelial growth factor. The activation and invasion of endothelial cells is one of the key processes in the neovascularization of DR. Therefore, we hypothesize that differentially expressed circRNAs such as hsa_circ_0001946 may lead to retinal endothelial cell dysfunction by binding to the corresponding target miRNAs, and thus influencing the onset and progression of DR. That said, further studies are needed to confirm our results.

Conflicts of interest  None declared.

Acknowledgements  The assistance provided by School of Life Sciences, University of Science and Technology of China and Aksomics Inc. are greatly appreciated.